Hailed as one of the world’s greatest living sculptors, Richard Serra is indeed one of the major artists of our time. Acclaimed for his challenging and innovative works emphasizing materially and an engagement between the viewer, the site, and the sculpture, Serra has come to focus primarily on large scale pieces, including many site-specific works that engage with a particular architectural, urban, or landscape setting. In the handling of heavy metal, Serra has no peer. His towering curves and sheets of oxidized steel are now an artistic signature, and critics view his massive steel plate sculptures as some of the defining works of our time. His spectacular show Richard Serra Sculpture: Forty years at New York’s Museum of Modern Art was selected by Time Magazine as the top museum exhibit of 2007, and described as the “the artworld thriller of the year.”

One of Serra’s earliest works of public art was also one of the 20th century’s most controversial: Tilted Arc, 1981, a curved wall of steel that stood in Federal Plaza in Manhattan, NY for eight years. Many more commissions and site-specific works were to follow, including: Serra’s Open field Vertical Elevations, 1982, at the Fattoria di Celle near Florence, Italy and Greenpoint, 1988, at the Sheldon Memorial Art Gallery and Sculpture Garden in Lincoln, Nebraska; Standing Stones, 1989, an installation of six granite blocks for the Des Moines Art Center in Iowa.

From 1990 to 1993 Richard Serra created and installed Snake Eyes and Box Cars at Oliver Ranch. “I wanted to establish a visual system to make the volume of the valley more tangible physically, to make the space more distinct,” Serra explained. The 12 corten steel blocks were made in a Seattle mill with the largest forging jaws in the United States. It took nearly a year to make the forms, which were heated to 2,300 degrees and pounded with a 145-ton hammer. Oliver had to reinforce the roads to truck the 250-ton work from Seattle to Geyserville, in a convoy that was two and a half miles long. Installation of the blocks was also an arduous task, but 10 days after leaving Seattle they were all set and welded into place. Snake Eyes and Box Cars deals in its own poetic way with changes in landscape’s elevation. Although the exact logic of the placement of the six sets is not apparent, the viewer senses immediately that their location is not arbitrary. Each set reads and functions differently due to the undulation in the fall of the land, the blocks attracting the viewer and deflecting the view through and into the landscape, setting up an elevational rhythm between the pairs.

In 1991, Serra completed Schunnemunk Fork, a site-specific sculpture commissioned by Storm King Art Center in Moutainville, New York. In 2001 Serra completed the installation Te Tuhiangi Contour in the Alan Gibbs Sculpture Park in Kaipara, New Zealand. A large permanent installation of eight Serra works was completed in 2005 at the Guggenheim Bilbao, Spain, in which critics praised as a stunningly appropriate use of their setting. In the spring of that year, Serra returned to his native San Francisco to install his first public work in that city on the new UCSF campus in Mission Bay.

Serra has exhibited widely over his entire career at major museums throughout the United States and Europe. Notable are two retrospectives at New York’s Museum of Modern Art (1986 and 2007), numerous exhibitions at the Guggenheim Museum and the Whitney Museum of American Art, and his huge site-specific opening exhibition of the Monumenta event at the Grand Palais in Paris in 2008.

Richard Serra received a Guggenheim fellowship in 1970 and the Skowhegan Medal for Sculpture in 1975. In 1994 Serra became a fellow of the American Academy of the Arts and Sciences and that same year also received the Praemium Imperiale of the Japan Art Association and an honorary doctorate of fine arts from the California College of Arts and Crafts.

Serra’s Snake Eyes and Boxcars at the Oliver Ranch consists of six pairs of forged corten steel blocks that Serra sees as delineating the entrance and exit of a steep-sided six-acre valley on the eastern portion of the ranch. The difference in elevation from hilltop to valley bottom is 85 feet, which Serra divided into five equal spaces enclosed by two-block markers, following the contours of the land at 17-foot intervals. The six pairs of blocks-each pair measuring 84 x 41 x 41 inches and 48 x 41 x41 inches respectively – crisscross the entire field and encircle the valley, covering the total drop in elevation. Each sculptural location becomes a vantage point to reassess the valley through the sculpture. Walking from one set of blocks to another, you sense the ground physically and you become acutely aware of how it changes in relation to your movement. As the surfaces of the steel weather, they develop a brilliant rust-red coating that is typical for corten steel in the outdoors. Because of the incredible density of the steel blocks and the length of time needed for the surface to begin to deteriorate in the rust coat, it is expected that the coating will take 25 years to weather uniformly. 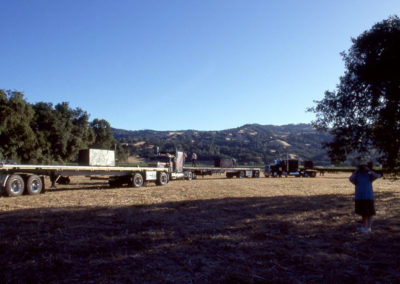 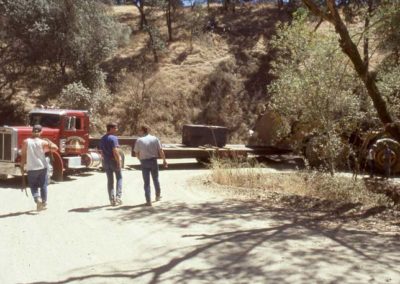 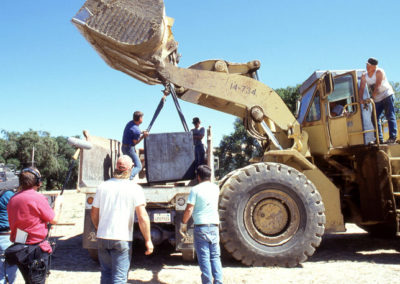 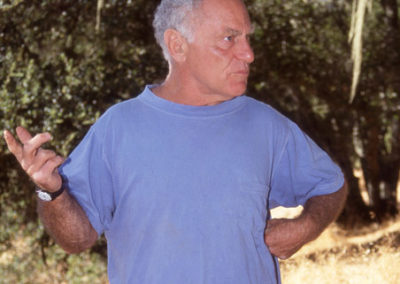 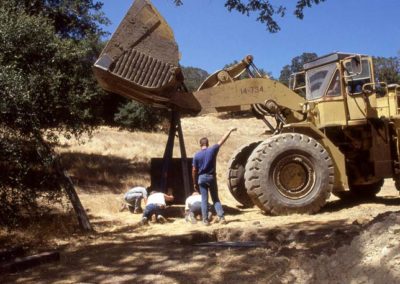 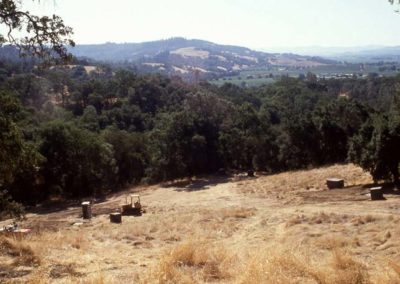 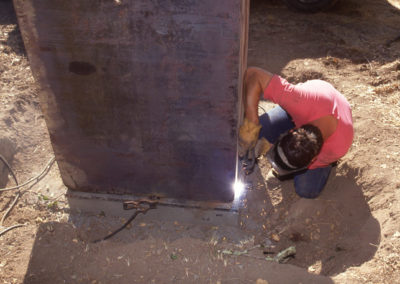 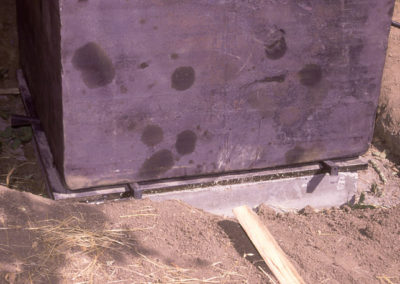 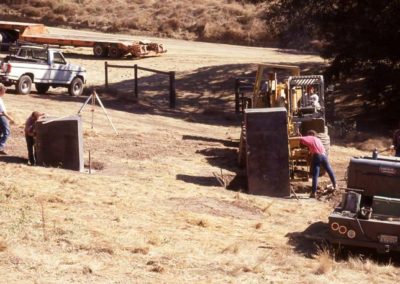 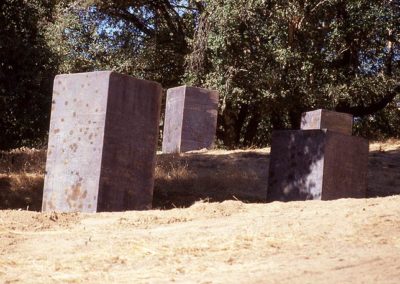 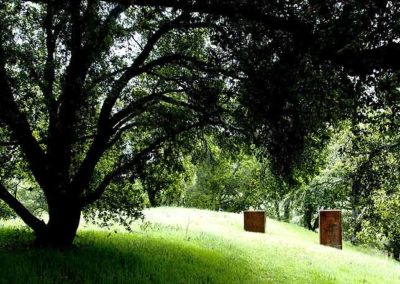 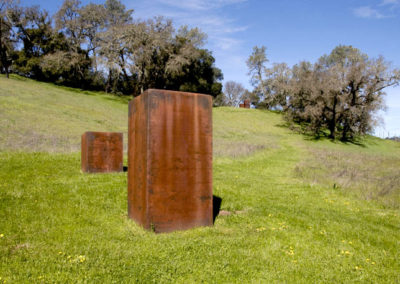 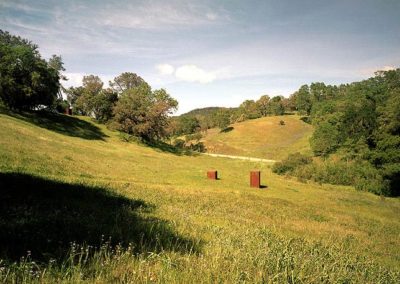